Outside TV is the leading video provider for the adventure sports and outdoor lifestyles category in the United States. Outside TV delivers films, series and shorts on a wide variety of sports including skiing & snowboarding, surfing, climbing, mountain biking, kayaking and more. Outside TV’s Emmy Award-winning content is distributed through multiple platforms, including national cable, satellite and OTT providers, outsidetv.com, social media and their app, Outside TV Features.

In this case study, we will examine why Outside TV selected SpotX as their primary video ad server and the resulting successes from the partnership.

What’s important to us from an ad serving perspective, is making sure we can accommodate our clients and our buyers needs in terms of how they want to deliver their ads. Whether they want to transact programmatically or on a direct basis. Whether they are giving us a third-party tag or we are hosting and transcoding the media assets through SpotX.
Ryan DaddSVP, Digital at Outside TV 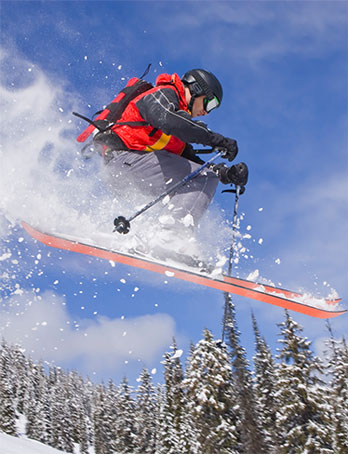 Outside TV noticed a shift in viewership from their broadcast channels to digital streaming and needed a partner to help them maximize their digital ad revenue. As a video-only publisher, they wanted a video-first ad server that could meet their ad revenue and transparency needs.

Outside TV selected SpotX as their primary ad server to help increase revenue and transparency. Working with SpotX, Outside TV has the flexibility to meet the needs of their clients and how they want to transact and buy media using a single platform.

SpotX’s robust integration suite enables Outside TV to monetize content across all screens, whether desktop, mobile, app or CTV based inventory. The integration process is made easy with the help of SpotX’s Customer Success team and the Integration Assistant, a tool that helps publishers find the optimal integration type for their tech stack.

The SpotX platform offers industry-leading transparency into all transactions. With SpotX, Outside TV discovered an opportunity to optimize revenue that had gone undetected with their previous ad server, and as a result, saw a 22% increase in fill.

SpotX’s transparent bid reporting allows Outside TV to enable ad exclusions and prevent sales conflicts. Additional reporting and targeting made possible through SpotX’s Key Value Pair (KVP) functionality allow Outside TV to tag all of their video content with KVPs that they pass to SpotX in each ad request. This enables Outside TV to communicate unique information about their inventory to buyers, for example, content category (Skiing, Cycling, Climbing, etc.), achieving higher CPMs through more granular targeting.

It is great to have a platform that offers a simple and intuitive interface and the flexibility to meet our clients needs regardless of how they want to transact and buy media. PMPs are becoming more and more popular with advertisers, especially with our clients, from a buyer’s perspective it adds a lot of transparency because now you’re seeing exactly where the ads are running.
Stan HuntingSr. Ad Operations Manager at Outside TV

With SpotX, Outside TV can manage traditional direct sold, programmatic direct and private marketplace deals using a single platform to yield the highest revenue for every impression sold.

SpotX uses parallel ad decisioning, rather than the traditional waterfall method, to fulfill ad requests. This reduces latency for the end user and increases competition to maximize Outside TV’s yield. Using SpotX’s tiering system, Outside TV can prioritize campaigns based on business agreements without removing competition or making additional ad calls.

0
increase in fill
0
increase in average CPM
For us, it helps improve fill rates for programmatic when working with a modern ad server like SpotX because we’re able to have our direct sold and programmatic demand compete against each other.
Stan HuntingSr. Ad Operations Manager at Outside TV

Advertisers increasingly buy based on audience rather than on context. Outside TV plans to leverage SpotX’s Audience Management Engine (AME) to maximize ad revenue by layering third-party data onto their campaigns. AME lets publishers seamlessly target their first-party audience data or third-party audience segments from the leading DMPs, all from within the SpotX Publisher Platform.

For example, Outside TV works with a number of auto manufacturers who would like to target their advertisements to automotive intenders that are of a certain target age. Utilizing third-party audience segments from one of the industry-leading DMPs integrated with SpotX, Outside TV can ensure their advertisers reach their desired target audience.

OTT is where all the eyeballs are moving, whether from desktop or from TV, and we’re excited for that partnership and know we are in good hands with SpotX.
Ryan DaddSVP, Digital at Outside TV
Menu