The Growth of Connected TV Advertising 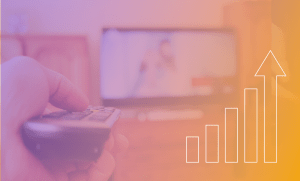 At this point, it’s safe to say that connected TVs (CTVs) have fundamentally shifted how we consume content. Of course, new ways to consume content mean new ways to monetize content. And lately, it seems the entire ad tech community has recentered their focus on CTV monetization.

However, CTV isn’t really that new of a technology; Roku and other manufacturers have been building CTV devices for the last decade. We thought it would be interesting to ask “why now?” and provide a deeper look into a few trends driving this growth.

1. Audience and inventory have scaled

The ad tech industry has been talking about the potential of CTV for years. However, when it comes to executing CTV buys, we’ve traditionally seen two major barriers: not enough eyeballs and not enough inventory. Fortunately, we’ve already crossed the biggest hurdle needed to remedy both of those problems – time. CTV adoption has grown dramatically in the last few years, seeing multiple years of double-digit growth. With the rise in users, there’s been a rise in CTV apps as well. Many of those apps are ad-supported, and just like how there’s a lot of ad space on the internet that doesn’t get sold through traditional means, we’re beginning to see a lot more programmatic CTV app avails as well.

Even if the eyes and inventory are there, to be completely honest, it doesn’t really matter if you still can’t reach the target audience you have in mind. Without granular targeting, CTV isn’t all that different from linear. While you can argue that the typical CTV viewer is still very different from the typical linear viewer, the allure of digital advertising comes from the potential of data activation! Unfortunately, since digital targeting on desktop and mobile web was primarily cookie-based, it took a little while for companies to solve the new riddle of being able to target consumers in cookieless environments like CTVs. This has changed in the last couple of years. Companies like Nielsen and Tru Optik have begun enabling increasingly granular data to bring CTV targeting closer to web video capabilities. In this way, we are in the middle of the realization of the promise of programmatic TV.

If the rise in ad blocking is any indication, a lot of people really don’t like seeing ads. This is especially true if they significantly disrupt the user experience. While ad blocking in general is less of an issue on CTVs, learnings from web indicate that the ad experience has a strong impact on the overall user experience. As such, ads still need to run seamlessly. The proliferation of free CTV apps means that consumers have options now. If a viewer’s app experience is characterized by ads constantly buffering or the same ad playing repeatedly, they’ll probably find a new app. This is where new technologies like server-side ad insertion (SSAI) come into play. While SSAI doesn’t save viewers from terrible internet connections, it does allow for the seamless insertion of ads directly into a stream to create a smoother, linear quality ad experience.

Allen Klosowski, SpotX SVP of the Advanced Solutions Group, further notes that, “In the past, viewers were often exposed to the same ad over-and-over again because there was a lack of standardized technology around identity management in CTVs. Today, SpotX improves the experience for both the viewer and the advertiser by providing tight exposure controls to audiences by providing buyers and publishers advanced tools for frequency capping and delivery optimization.” Increasingly, ad tech companies are beginning to discover new methods of identity management while respecting consumer privacy to enhance the overall ad experience. Ideally, this would make advertising more palatable to consumers and keep the internet free, regardless of device.

For years, CTVs have been steadily transforming the content consumption landscape, and this trend shows no signs of slowing down. Accordingly, similar to how programmatic display took and continues to take a bigger piece of the pie from traditionally sold web inventory, we expect that RTB CTV spend will also skyrocket as it continues to scale into an increasingly valuable ad channel. However, CTV is still maturing and is a riddle that hasn’t been fully solved. Stay tuned for the next installment of the CTV series – Barriers and Breakthroughs in CTV.