SVODs and vMVPDs: Pioneers of a New Age of TV and Video

The following is an excerpt from the SpotX Global TV and Video Trends white paper. Follow the link to learn more about five trends contributing to the rise of digital video.

If faster internet and more distribution channels are responsible for the rise of Total Video, subscription video on demand (SVOD) and virtual multichannel video programming distributors (vMVPD) platforms are the businesses capitalizing on that disruption by forging a new post-cable order.

The poster child at the center of it all, of course, is Netflix. From its humble beginnings as a DVD rental business to its present reign as an online streaming behemoth boasting 125 million worldwide subscribers, Netflix’s runaway success has allowed it to fundamentally rewrite the ways that video content is created, distributed, and enjoyed by audiences. Aside from proving that SVOD is a viable business model, Netflix was the first major player to experiment with original online content that never airs linearly as well as the “all-at-once” release format. As Parrot Analytics noted in their Global Television Demand Report, content investments among the three largest SVOD platforms more than doubled between 2013 and 2017, from $5.5B to $13B. To the delight of binge-watchers around the world, this has led to a five-fold increase in original streaming content, with the number of new shows ballooning from just 21 in 2013 to 114 in 2017.

vMVPDs like Sling TV and fuboTV operate differently than streaming services and help bridge the gap between traditional cable offerings and SVOD platforms. Many vMVPDs use a skinny bundle approach, offering cheaper and more streamlined channel packages to consumers via set-top boxes like Roku, Apple TV, Amazon’s Fire TV or gaming consoles. Skinny bundles allow consumers to pay only for channels they want to watch, opening up a new market for digitally savvy or cash-strapped audiences previously dissuaded by bloated cable packages.

However, rapidly evolving business models in the space are causing the lines between SVOD and vMVPD platforms to begin to blur. Some traditional SVOD platforms like Hulu and Amazon have entered into live programming via Hulu Live and Fire TV’s “On Now” category, while vMVPDs like Sling TV and fuboTV, among others, offer VOD services. This trend towards convergence will almost inevitably continue into the future.

Further, with the success of SVOD and vMVPD platforms, it was only a matter of time before media owners like Disney and even companies like Formula One Group started getting into the subscription game themselves. These companies sit on troves of IP and media content waiting to be monetized, creating an incentive toward setting up their own subscription service to reap the benefits more directly instead of choosing a third-party distributor like Netflix or Amazon. Further, since media owners have a habit of keeping their IPs close, we’ll likely see a lot more exclusive content fractured across disparate platforms. And if companies with lots of existing IP withhold it from  third-party platforms, there may be an even larger surge in original video content produced by SVODs to compensate.

These are exciting developments, but they also open the floodgates onto an already crowded market. Many broadcasters have by now launched one-to-one subscription services for their channels through TV Everywhere apps or vMVPD subsidiaries (e.g. Sling TV is owned by Dish Network). For consumers, this means you will likely need more subscriptions in the future to access the full range of content you want. Below is an overview of how many OTT subscriptions are held by US broadband households, and even in 2014, over half of respondents already had at least 2 services. 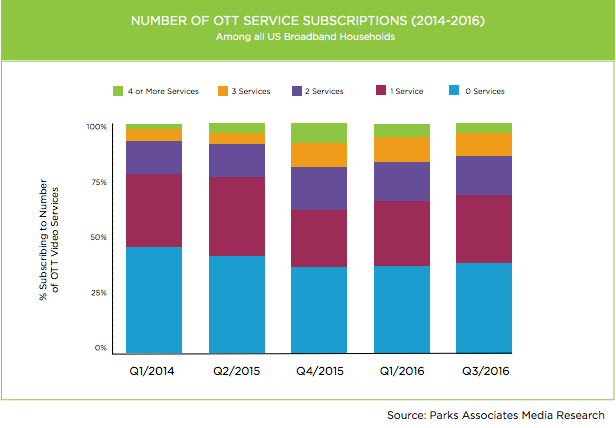 This phenomenon isn’t limited to the US. In fact, the previously mentioned Deloitte Global report notes that UK soccer fans typically subscribe to two TV services, as Premier League broadcast rights have traditionally been split between two national broadcasters. From the phones we use to the subscriptions we choose, the gift of technology is the gift of options. Right now, there’s more content coming from more sources than at any other point in recorded human history. The increasing complexity of figuring out what mixture of options works best for us just happens to be the price of progress.

It’s clear that recent technological advances will continue to shift how we define and consume TV and video. Contrary to popular opinion, linear TV and traditional broadcasters are not dying but evolving to cater their offerings towards the new digital reality.

Those who remain uncertain about the future of TV can find guidance in the legacy of radio, which was once a living room staple. Today, very few, if any, people gather together in their living rooms for a radio program, but plenty of people listen to the radio in their cars and others engage with audio through new mediums like podcasts, which have exploded in popularity in recent years. Similarly, TV isn’t going anywhere, though it will continue to evolve as programming surfaces on new screens and streams, heralding the era of Total Video. With so much territory up for grabs, the stakes have never been higher, and we expect to see continued experimentation in the marketplace, from non-traditional contenders to original business models all vying to better serve us – the viewers at home and on the go.